The decline in the Energy sector seen over the past few years rivals the crashes seen in the Technology sector in 2000-2002 and the Financial sector in 2007-2009. What is more, the energy sector’s declines have come amid a strong rally in the broader market. As a result, the sector’s share of the U.S. market has declined far more than was the case for Tech or Financials, falling a breathtaking 87% since its 2008 peak.

Falling oil prices and the resultant decline in sales and earnings explain only a part of the energy sector’s decline, with pessimism over the future of fossil fuels causing investors to extrapolate the deterioration in the sector’s fundamentals. Our take is that herd mentility has caused investors to be overly pessimistic about the death of fossil fuels, making the 7.5% forward dividend yield on the MSCI Energy index among the best risk-reward prospects in the market today.

The prevailing wisdom regarding the oil market today is the polar opposite of that seen just over a decade ago. Back in 2008 we recall reading stories daily about how oil was running out and that higher prices were inevitable. Oil was also seen as a hedge against monetary debasement and the decline in the dollar. Goldman famously called for $200 a barrel in May 2008.

12 years on, WTI is trading 75% lower, U.S. money supply 140% higher, even more of the planet’s most easily accessible oil reserves have been depleted, and global oil consumption is 10% higher despite the world remaining partially locked down. Despite all these factors, fears of peak oil demand dominate.

Looking back it is now clear that high oil prices in 2008 helped dampen consumption growth and trigger an increase in supply. After WTI prices tripled in 18 months to a peak of $147 a barrel in 2008 it should have been clear at the time. Similarly, today’s low oil prices should be expected to lift demand, curtail supply, and lead to a recovery.

Despite the supportive factors underpinning oil prices explained above, investors appear convinced about the ability of the global economy to wean itself off of fossil fuels. Proponents of this view point to the declines already seen in oil consumption in the U.S. and Western Europe as evidence of an inevitable shift towards Green energy. However, from a global perspective such a shift is far from guaranteed.

Firstly, the huge amount of infrastructure needed in order for the West to reduce its oil consumption will itself require huge amounts of oil consumption. The far greater efficiency of hydrocarbons relative to solar and wind means that oil is likely to play a key role in the mining and manufacturing of the raw materials needed to build renewable infrastructure.

Secondly, Emerging Markets, home to 85% of the global population and around 60% of global GDP, are likely to firmly prioritize economic growth over the environment. Energy costs are an incredibly important factor in determining economic growth rates in emerging markets and low oil prices all but ensure a rise in demand among poor populous Asian and African markets. It will likely require significant economic development in such economies before we see the environment take precedence over the economy.

Oil Rally Not Needed For Energy Stocks To Outperform

The MSCI Energy sector is now trading at just 1.8% of the MSCI U.S., compared to over 15% at the 2008 peak, offering a 7.5% dividend yield compared to just 1.1% back then. Even if oil prices remain at current levels we should see the energy sector dramatically outperform the broader market if history is any guide. 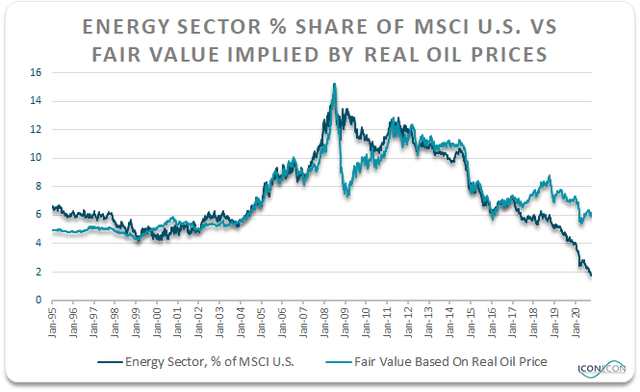 The energy sector is even more undervalued today relative to both oil prices and the broader market than it was overvalued back in 2008/2009. Back then the sector’s weighting in the MSCI U.S. remained elevated near 15% despite a 75% oil price decline. What followed was gradual energy sector underperformance even as oil prices recovered. With this in mind we expect to see the energy sector’s weighting in the MSCI U.S. recover strongly over the coming months and years even if oil prices remain at their historically-depressed levels.

Disclosure: I am/we are long XLE. I wrote this article myself, and it expresses my own opinions. I am not receiving compensation for it (other than from Seeking Alpha). I have no business relationship with any company whose stock is mentioned in this article.