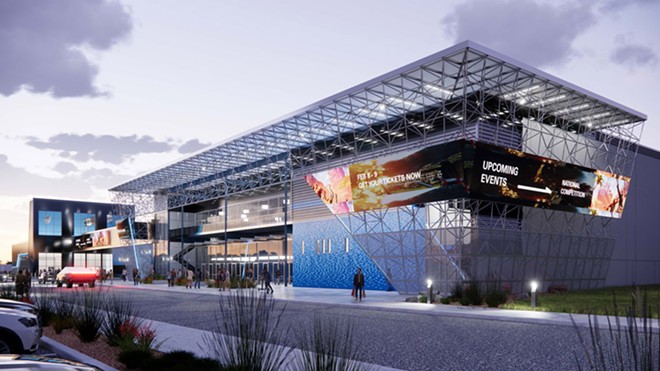 This rendering shows the completed Tech Port Center + Arena, a 3,200-seat venue that will open in May.

If the developers of San Antonio’s newest entertainment venue have their way, ticket buyers won’t just be flicking their Bics for encores, they’ll be pressing reset buttons on their controllers to start the next game.

The $70 million Tech Port Center + Arena will make its debut in early May, bringing the South Side its first sizable concert venue. To that end, the 3,200-seat facility has already raised the curtain on a varied music lineup that kicks off with a show by ’90s rock act Smashing Pumpkins.

But live music is just part of the plan for the arena, overseen by LA-based venue-management giant ASM Global. Tech Port wants to put San Antonio on the map for esports — competitive videogaming events that can draw crowds comparable to those of top touring acts.

“Because of the mixed-use nature of this venue, I think we’ve increased our marketability,” said David Grundy, ASM’s director of operations for the new arena. “We’ve got a state-of-the-art facility, and we’ll be able to do concerts, to do esports, to do comedy, maybe even to do boxing.”

Tech Port is the latest development at Port San Antonio, the 1,900-acre business park at the site of the former Kelly Air Force Base. Port officials bankrolled the arena project in hope of raising profile for the park, nestled in the city’s largely overlooked southwest quadrant.

So far, so good. Tech Port’s May 2 Smashing Pumpkins show is all but sold out. What’s more, the arena grabbed headlines with a string of other concerts announcements including Southern rapper Kevin Gates, Mexican indie-pop singer Carla Morrison and Grammy-nominated San Antonio rock outfit Nothing More.

The bookings should come as little surprise given ASM’s strong industry rep. Adding to the star power, Tobin Entertainment LLC, the tour promotion arm of San Antonio’s Tobin Center for the Performing Arts, has also inked a deal that allows it to book acts into Tech Port.

Given esports’ lower public profile in San Antonio, that part of the Tech Port puzzle may look less certain to outsiders. However, Grundy expects gaming competitions to account for half of the venue’s bookings, noting the tournaments’ worldwide growth and a rapid expansion of esports programs on high school and college campuses.

The global market for esports competitions hit $947.1 million in 2020 and is projected to reach $1.6 billion by 2024, according to market research firm Statista. Such events regularly draw tens of thousands of visitors, and the largest ever, a StarCraft tournament in South Korea, boasted more than 120,000 attendees.

As the market grows, so do the profile of esports events and the prize money they pay out, observers also note. In October, the International Dota 2 Championship set a record for an esports tournament purse, offering $40 million. The winning team split $18.2 million of the total.

To the brass at Port San Antonio, the venue’s esports orientation feeds into its focus of attracting technology startups and tech-savvy workers.

The business park has amassed roughly 80 tenants, which includes not just aviation holdovers from its air base days but firms in cutting-edge fields such as robotics and cybersecurity. The port also hosts the San Antonio Museum of Science and Technology, a frequent site for school field trips.

However, except for those schoolkids and the port’s 15,000 workers, few other Alamo City residents have had reason to visit. Port San Antonio CEO Jim Perschbach hopes Tech Port, which can also host business conferences and conventions, can change that while evolving into a revenue generator.

“If we can bring in hundreds of thousands of people every year, they may be down here for a concert, but then they see the museum and they see the show place and they see some of the technology being developed,” he explained.

“They may come in for a business conference and get to see the activities that we have. And hopefully some of that will go beyond just awareness and will go into helping us further attract companies to this campus, entrepreneurs to this campus, institutes to this campus — and keep us growing.”

Beyond the concerts and esports, Tech Port will house Austin-based tech accelerator and incubator the Capital Factory’s Center for Defense Innovation as well as a business conference center and the San Antonio Museum of Science and Technology, which is being relocated from elsewhere at the port.

The facility also will house a food hall with a full bar, something Perschbach said will also add to its draw — especially since dining options are limited around the former base.

When it opens in May, the hall will include outlets from local restauranteurs Brevity Coffee, Big Bib BBQ and Capo’s Pizza. Cherrity Bar will run both a Kuriya ramen shop and a La Tienda de Birria taqueria, while Earl Abel’s will oversee its name-brand diner concept along with a sandwich shop called The Pantry.

“If we’re operating this correctly, we’ve got plenty of room to bridge between entertainment and industry and technology,” Perschbach said. 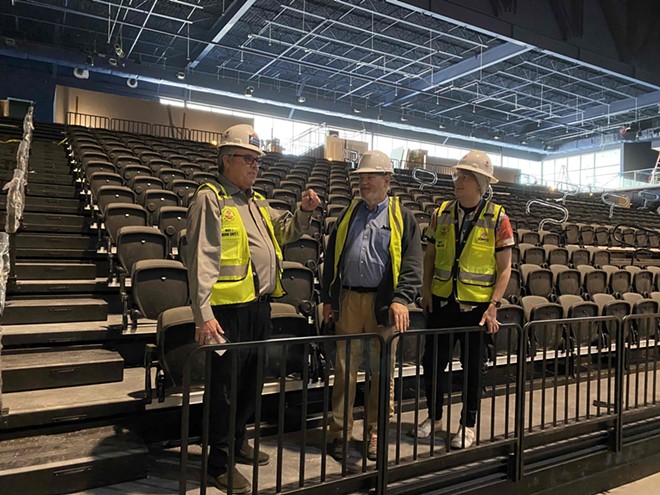 From the ground up

So far, Tech Port’s concert announcements have outpaced those for its esports events. But stand by, ASM officials said, they’re coming.

Last week, the arena revealed that it’s landed a May 6 showdown between rival Dallas and Houston teams in Blizzard Entertainment’s Overwatch league, an event likely to pull up to 1,200 attendees. The tourney will be the league’s first in-person event since 2020. The gathering will also mark the first public unveiling of Overwatch 2, the game’s much-anticipated sequel.

Even so, Tech Port officials say they expect to make headway because the facility is among the first designed for esports from the ground up. The site features huge amounts of data capacity, G5 wireless and its own video production center, including six in-house cameras.

Being equipped those tech extras is vital for facilities that want to compete in the esports market, industry analyst Roger Entner of Recon Analytics said. First, gamers will expect it, and second, their ability to share video will help raise the profile of the venue since the footage gets views worldwide.

“When you’re talking about these esports events, every person in attendance is a creator,” Entner said. “They want to livestream and show video of themselves meeting their favorite gladiators. And it has be on video. Selfies are so 4G.”

Bells and whistles aside, Tech Port’s capacity hits a sweet spot for the city, according to observers. The venue’s 3,200 seats put it between downtown performance spaces — the 1,800-seat Tobin Center and 2,300-seat Majestic Theatre, for example — and considerably larger venues including the 12,000-seat Freeman Coliseum, 18,500-seat AT&T Center and 20,000-seat Real Life Amphitheater.

Of course, Tech Port is coming online just as two other high-profile venue projects make headlines. But, again, neither looks like it will hem in on the South Side venue.

The Pearl’s forthcoming Stable Hall will seat just 1,000, making it more the size of a large club, and the proposed renovation of Sunken Garden at Brackenridge Park would give it a total capacity of roughly 7,000.

“[Tech Port] is doing an amazing job of building a high-quality entertainment facility, which happens to be 1,000 seats bigger than we are,” said Aaron Zimmerman, vice president of programming for the Tobin. “That gives us more leverage to bring in talent that otherwise would have passed San Antonio by.”

Zimmerman acknowledges that San Antonians may not be used to thinking of the former Kelly AFB as an entertainment destination, but he points out that the arena is just minutes from downtown.

Not to mention, a venue’s draw is more based on the quality of its bookings than its zip code. Something that likely applies whether it comes to a touring band or an esports tournament.

“I’ve heard people raise the concern about its location, but I think that’s a perception that will quickly go away,” Zimmerman said.

Stay on top of San Antonio news and views. Sign up for our Weekly Headlines Newsletter.